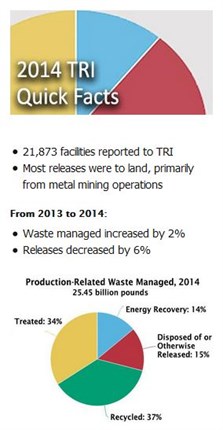 WASHINGTON -- In 2014, 84% of the 25 billion pounds of toxic chemical waste managed at the nation's industrial facilities was not released into the environment due to the use of preferred waste management practices like recycling, energy recovery and treatment, according to the U.S. Environmental Protection Agency's (EPA) annual Toxics Release Inventory (TRI) report. The remaining 16% was released to the air, water or placed in some type of land disposal. Most of these releases are subject to a variety of regulatory requirements designed to limit human and environmental harm.

The 2014 TRI data show a 6 percent decrease in total disposal or other releases to the environment from 2013 to 2014. Notably, air releases from industrial facilities decreased by 4 percent during this period, mainly due to decreases from chemical manufacturing facilities and electric utilities. Air releases have decreased 55% since 2003.

"2016 marks the 30th anniversary of the Toxics Release Inventory, a program that has given people unprecedented access to information about what toxic chemicals are being used and released in their neighborhoods, and what companies are doing to prevent pollution,” said Ann Dunkin, EPA’s Chief Information Officer. “TRI data continue to be an essential part of informed decision-making by citizens, communities, industries, and local governments.”

TRI data are submitted annually to EPA, states, and tribes by facilities in industry sectors such as manufacturing, metal mining, electric utilities, and commercial hazardous waste. Under the Emergency Planning and Community Right-to-Know Act (EPCRA), facilities must report their toxic chemical releases for the prior year to EPA by July 1 of each year. The Pollution Prevention Act of 1990 also requires facilities to submit information on pollution prevention and other waste management activities related to TRI chemicals.

This year, the TRI report is available on its own dedicated website, giving users easier access to key information, including analyses and interactive maps showing data at a state, county, city, and zip code level. Other new features of this year’s analysis include integrated demographic information, profiles of federal facilities and the automotive manufacturing sector, and a discussion forum where users can share feedback about the report.

To access the 2014 TRI National Analysis, including local data and analyses, visit www.epa.gov/trinationalanalysis.

Information on facility efforts to reduce toxic chemical releases is available at www.epa.gov/tri/p2.