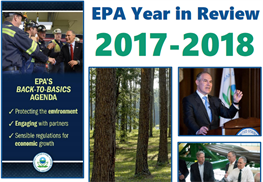 On March 5, 2018, the Environmental Protection Agency (EPA) issued a report titled EPA Year in Review 2017-2018. The report includes an introductory letter by EPA Administrator Scott Pruitt in which he states he has been “hard at work enacting President Donald Trump’s agenda during [his] first year as EPA Administrator.” The report goes on to highlight accomplishments of the previous year and discusses their commitment to returning the agency to its core mission.

According to the report, Administrator Scott Pruitt “has set forth a ‘back-to-basics agenda’ centered on returning EPA to its proper role via three objectives:”

The EPA’s Core Mission, as stated in the report, is “clean air, land and water.” A core mission that, according to the report, the EPA has expanded its authority and jurisdiction outside of in recent years. The report continues:

“In the process, central responsibilities of the Agency took a backseat to ideological crusades, allowing some environmental threats like cleaning up toxic land –to go unaddressed. Administrator Pruitt returned the Agency to its core mission and prioritized issues at the heart of EPA’s purpose: ensuring access to clean air and water, cleaning up contaminated lands and returning them to communities for reuse, improving water infrastructure, and ensuring chemicals entering the marketplace are reviewed for safety.”

Topics covered in the report include:

The report can be found on the EPA’s website.

06-11-20Monthly SPCC Inspections: How Minutes Could Save Millions

04-30-20How to Avoid Spring Mold Growth in Your Facility