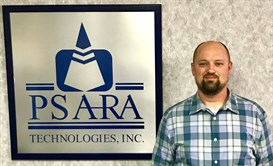 PSARA Technologies, Inc. is excited to announce the addition of Joel Gross, P.E., LEED AP ND as a Senior Engineer and Project Manager.  Joel brings more than 15 years of civil, environmental, and mechanical engineering experience to PSARA.  His experience in municipal infrastructure engineering will expand the technical capabilities of our engineering team and allow us to be a cost-effective resource to small municipalities in Ohio, Indiana, and Kentucky.

Joel received his Bachelor of Science in Civil & Environmental Engineering from the University of Cincinnati College of Engineering and is a professional engineer licensed in both Ohio and Iowa.  Additionally, Joel served in the United States Marine Corps from 1999 to 2003.  As a Drafter-Surveyor, he designed and oversaw several infrastructure projects, both in the United States and abroad.  In 2003, Joel transferred to 2nd Combat Engineer Battalion, where he served a combat tour in Iraq from February to July.

In his free time, Joel enjoys spending time with his wife and children, riding his motorcycle, playing tennis, and woodworking.  As a Cincinnati native, Joel also enjoys keeping up with his favorite Cincinnati sports teams.

Joel can be reached at PSARA Technologies by phone at 513-792-6946 or by email at jdgross@psara.com.